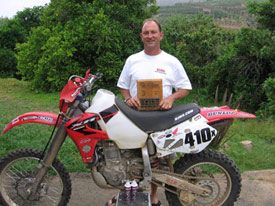 Chris Steward reported that they had no tire failures during the course of the race and no rider "get offs." Steward also noted that they were shorted on fuel out of a pit-stop and had to actually push the bike into the next checkpoint, a misfortune which “probably cost us a higher place on the podium.”

That’s Baja for you!

The race featured a race-record 438 starters, from 28 US states, Mexico, Canada, Colombia, France, New Zealand and Japan, for Round 3 of the world-renowned six-race 2006 SCORE Desert Series.

The large field, competing in 25 Pro and 6 Sportsman classes for cars, trucks, motorcycles and ATVs, was the largest in the storied history of the summer desert classic, easily eclipsing the event record of 384 starters set in 1976. It is also the largest starting field in the three-decade-plus history for SCORE race in Mexico and second-most in the history of SCORE.

Since 1993, Nancy Emde and Chris Steward have operated Trail Boss Tours, an off-road adventure company that provides fun, safe and enjoyable vacations for novices and advanced riders. Trail Boss Tours offers exciting trips in areas such as Baja, Northwest Arizona, the California Lost Coast, the High Sierra and the Mojave Desert. Visit them on the web at www.trailbosstours.com.

Steward raves about the performance of Ride-On. “I had one of my associates ride my KLR 650 to Ensenada for the race, and he was blown away at the new-found stability” that Ride-On provides. Steward has Ride-On in all of his motorcycles and support vehicles. Steward goes on further: “I'll give you the straight up on this product […] we have 16 bikes rolling in Baja, 3 trucks and vans, and 3 trailers [and it] looks good so far!” 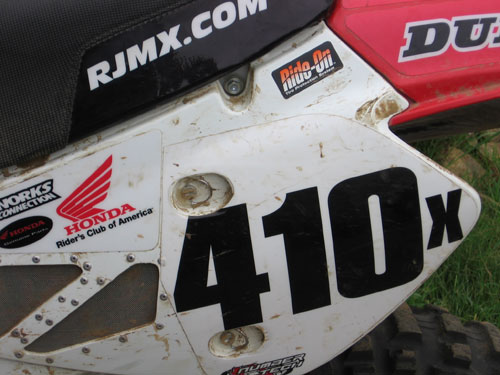