This is one of the most common questions asked by our distributors and customers. Without getting too technical, this White Paper is an attempt to describe the forces generated by spinning bodies (i.e., tires spinning around the axis), the effect upon the tire, and, in turn, on the Ride-On TPS sealant inside the tire.

Centrifugal force (from Latin centrum "center" and fugere "to flee") is a term which may refer to two different forces which are related to rotation. Both of them are oriented away from the axis of rotation, but the object on which they are exerted differs.

Force which is oriented toward the axis of rotation is called a centripetal force.

Centrifugal force is an outward force on a body rotating about an axis, assumed equal and opposite to the centripetal force and postulated to account for the phenomena seen by an observer in the rotating body. 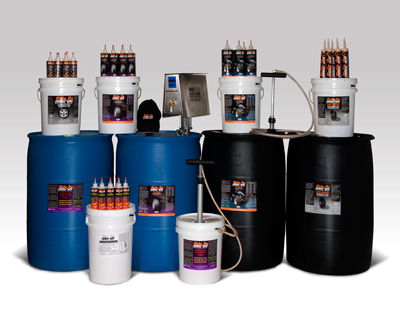 Newton's Third Law of Motion: For every action, there is an equal and opposite reaction.

How does this all apply to balancing with Ride-On TPS?

In a perfect world where all tires and wheels are perfectly balanced, a spinning wheel and tire will have equal centrifugal and centripetal forces all the way around the tire. Thus balancing of the two counteracting forces would give the rider a nice smooth ride, and allow the tires to wear evenly (providing there were no problems with the alignment of the vehicle).

Since we do not live in a perfect world, all wheels and tires available to the mass market have imperfections that cause an uneven distribution of weight around the perimeter of the wheel and tire.

Conventional lead weight balancing attempts to balance the forces by the placement of a lead weight fastened to the wheel which compensates for a heavy spot on the opposite side (180 degrees) of the wheel and tire. This solves the problem for a while until the wearing of the tire (over the course of several thousand miles or kilometers) creates another heavy or light spot somewhere else on the perimeter of the tire and necessitates another balancing of the tire-wheel assembly to correct the new imbalance.

How this applies to tires and wheels and to Ride-On is as follows:
When a tire is spinning, centripetal force is created. The centripetal force (the inward force towards the axle) is in balance with the centrifugal force that is going outwards radially away from the spinning axle.

If there is an imbalance in the tire and wheel assembly in the form of a heavy spot on the tire or wheel, it creates an increase in the centripetal force at the heavy spot. Since both the centripetal and the centrifugal forces have to be in balance (Newton’s Third Law), the excess centripetal force created by the heavy spot of the tire exerts a directional force on the Ride-On gel inside the tire. Ride-On tire sealants have been specially formulated to be able to move inside the tire and not only seal the liner but also be a force cancelling mass to help reduce vibrations. In this instance, the Ride-On tire sealant attempts to correct the imbalance by sliding internally to the opposite side of the place of static imbalance and counteracting it to balance out the forces. This is called hydrodynamic balancing.

The Ride-On tire sealant is a unique tire sealant gel that is formulated as a pseudoplastic. This means that Ride-On responds to shearing (gravitational) forces created by the spinning tire by reducing viscosity. This reduced viscosity allows Ride-On to move and readjust its position inside the tire in response to the centrifugal and centripetal forces that have been placed upon it. Once the shear forces have been removed (in other words, the tire stops spinning), Ride-On instantaneously regains its viscosity and gel quality. This allows it to stay in place and not drip and drop down to the bottom of the tire.

With Ride-On in your tires, the problem of having to rebalance your tires goes away. As you drive, the sealant is sensing the forces created by the spinning tire and the gel makes adjustments from inside the tire to balance out the centripetal and centrifugal forces.